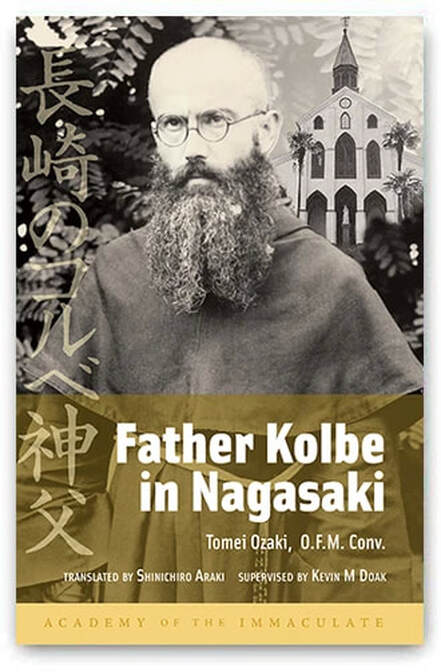 Father Kolbe in Nagasaki, by Tomei Ozaki, O.F.M. Conv.
Come to know about the life of St. Maximilian Kolbe in Japan
and his love for Our Lady!

In 1930, he founded a friary in Nagasaki (still active) amid seemingly impossible challenges and hardships with the help of the Immaculata.

This book was written by a Japanese Franciscan Conventual Friar, Brother Ozaki, who, in 1945, entered the same friary founded by St. Maximilian – just two months after Nagasaki was blasted by the atomic bomb.

Brother Ozaki resided with the friars who personally knew and lived with St. Maximilian and who highly admired the saint’s heroic act of martyrdom for a fellow prisoner.

This engaging book tells of these friars’ endearing experiences and memories of St. Maximilian during those six years – sure to stir interest not only in this heroic saint – but also Our Lady.
Buy Now

Tomei Ozaki was a Japanese Conventual Franciscan Friar. He was accepted into the friary founded by Saint Maximilian Kolbe in Nagasaki, just after having experienced the atomic bombing.

In this friary, Friar Ozaki heard a lot about Father Kolbe’s life from the Polish friars who had lived with him. Friar Ozaki wrote this book mainly based on the friars’ testimonies.

He also wrote another book about Father Kolbe, Love of Sacrifice. He passed away in Nagasaki on April 15, 2021.